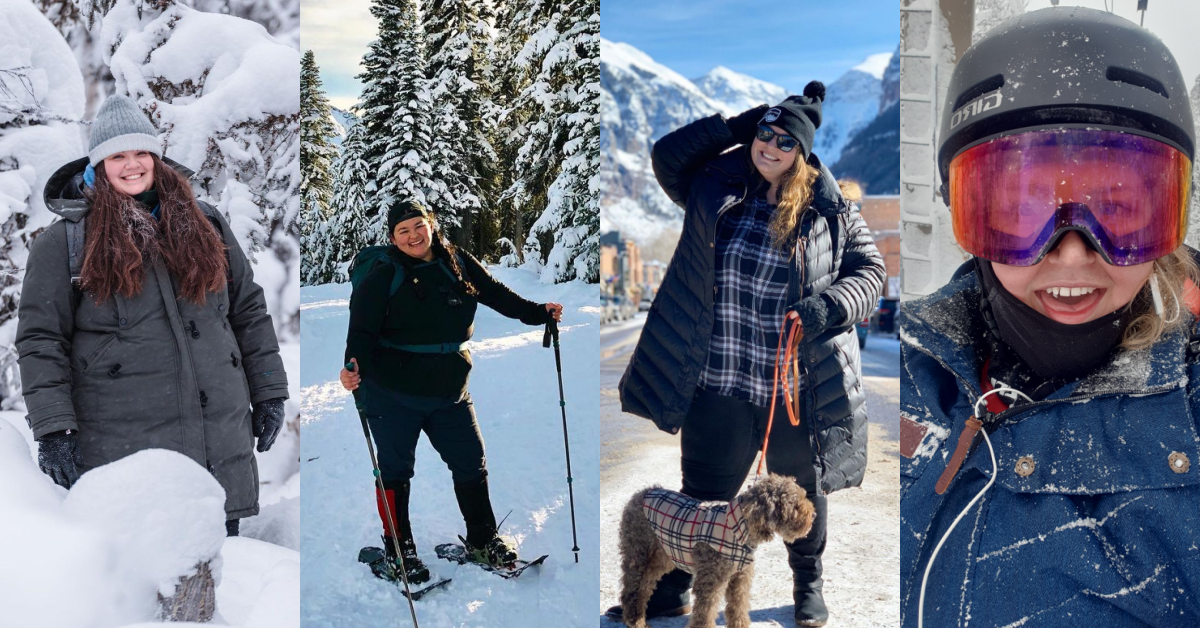 Rachael Oakes-Ash is the founder of SnowsBest.com and the name behind @misssnowitall and the #showusdagirls movement to feature more females of all ages, sizes and skill levels in social media.

When was the last time you saw a ski resort social page post an image of a plus-size skier or snowboarder actively skiing and snowboarding?

It’s hard to feel acknowledged or included when you’re not represented, and all you see is twenty-year-old-size-10-skiers and boarders - if you see females actively skiing at all. But while the ski industry lags, they’re missing out on a market that despite stigmas and myths are highly active, adventurous and wanting to ski or keep skiing.

"Plus-size" or as I say, full-bodied, in the USA is considered size 18 and up and in Australia size 16 and up. According to Healthline, the average American woman wears a size 18 pants and if you live in Australia then you’ll know the average is a size 16.  Yet both sizes are hard to find in the mainstream outerwear world and harder to find in resort social feeds.

The "living life large" clothing industry is worth a lot of money and it's on the rise. In 2019 the industry was worth US$419 billion and it is expected to reach US$696 billion by 2027. That’s a lot of moolah whichever way you look at it.

The snow industry needs all the help it can get to grow the market when climate change is killing seasons and Covid is closing lifts. Inclusion is more than key.

On any given day, due to the lack of fashion industry size standards, the average skier or boarder could be anything from a medium to an XXL dependent on the brand they’re wearing. Imagine the frustration while wrestling with ski and snowboard gear just so you can step on the slopes and go skiing or snowboarding. As a consequence, many humans give up before they’ve even bought a lift pass.

The messages are clear, even if they are not intentional - you’re not welcome here, there’s no imagery of you, there are no clothes to fit you, this place is not for you.

But we know that’s not true.

Dig a little deeper on social media and you’ll find a plethora of men and women who live life large and choose to actively adventure travel and/or ski and snowboard.

Iya Thomas founded @shapelyevents and runs annual ski retreats, Ashley Manning from @ashleysadventure is a plus-size explorer who hikes, white water rafts and more, @kanoagreene runs body positive retreats and @louisegreen_bigfitgirl is proving size has nothing to do with fitness.

Meanwhile, the body confidence and positivity movement have given young girls and women more reason to get outside, to feel no shame and to love their curves. Both @christinelarainee and @danaemercer are busting the myths of Instagram filters and fake perfect bodies.

Some brands have embraced this including ASOS globally and The Iconic in Australia who both offer plus size fashion in the mainstream online world and Target now use mannequins of larger body shapes in-store. Even the fashion runway has acknowledged that one size has never fit all with – Dennis Basso, Rebecca Minkoff and Caroline Herrera are all offering plus sizes.

In recent times This is Us, Empire, Glee, Dumplin’ have all featured plus-size actors in decent roles and musicians Lizzo, Tones and I, Kelly Clarkson and friends are unashamedly plus size and owning it.

While in the outdoors world Gregory has announced a new line of backpacks designed in collaboration with the Unlikely Hikers body inclusive group for plus size hikers, most outdoor brands still simply stop at XL when it comes to ski and snowboard outerwear sizing.

It's just not good enough.

Again, despite popular belief, finding “ski models” isn’t always easy for ski resorts. There are little marketing dollars to pay models, most just ski in front of the camera for a lift ticket, others are members of the marketing team.

Ski school no doubt offers some hope, as we all know that ski instructors are not all size 8 because we’ve skied with them at resorts. But finding ski instructors with free time when the powder is on is not an easy task.

It should, however, be prioritised. Resorts and tourism bodies could reach out to the plus-size influencers who love adventure and the snow, invite them for a ski trip, send a photographer, flood their feeds.

Then consider size when creating marketing collateral, brochures, website imagery and more. Keep plus size skiers and boarders in the cold at your own peril. If they’re adventurous they’ll find something to do where they feel more included, more welcomed.

It’s an industry-wide issue that will take a collaborative and collective approach dedicated to diversity, not just in size, but it’s a good place to start.